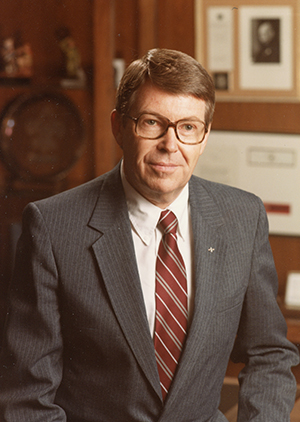 “President Brady’s belief in humanity and his commitment to outstanding teaching left a lasting impression on this university,” said current WSU President Charles A. Wight. “We will miss his kindness and wisdom, and we will work to ensure that his legacy will live on in Weber State’s commitment to excellence.”

Appointed on June 11, 1978, Brady is credited with beginning a new era at what was then Weber State College. From the beginning of his tenure as president, Brady emphasized the importance of making Weber State a superior undergraduate college, stressing teaching excellence.  His legacy was highlighted in a video celebrating Weber State's 125th anniversary.

In an interview with the student newspaper, The Signpost, published Sept. 29, 1978, Brady shared his vision:

“This institution is here for the students; no question about that. Our primary responsibility is to see that students that attend here…receive the finest education they could possibly get.”

During his tenure as president, Brady championed teaching excellence, scholarship and research. In his name, the WSU Brady Presidential Distinguished Professor program has honored outstanding faculty since 2006.

While he was president, enrollment and donations increased. In 1982, the J. Willard Marriott Family Foundation made a gift of $1 million to the School of Allied Health Sciences, which led to the construction of the 59,000-square-foot Marriott Allied Health building.

Brady, who had a doctoral degree from Harvard Business School, served as the Assistant Secretary for Administration and Management of the Department of

Health, Education and Welfare in the Nixon administration. He worked as vice president of Hughes Tool Company, and just prior to his appointment at Weber State, had been executive vice president of Bergen Brunswig Corporation. He had a special interest in business, and was pleased when Weber State was granted its second master’s degree program, the Master of Accounting, which began in the fall of 1985.

After seven years as president of Weber State College, Brady submitted his resignation in March 1985 to “involve myself in new and exciting dimensions of public service.” In May of that year, he was announced as president of Bonneville International.

Brady continued to support Weber State after his tenure, attending commencement ceremonies regularly and presenting for the Ralph Nye Lecture Series in the John B. Goddard School of Business & Economics.

In 1980, Brady shared his recollections as president as a part of the Weber State College Oral History Program. To read a transcript of the interview, visit library.weber.edu/content/brady-rodney. 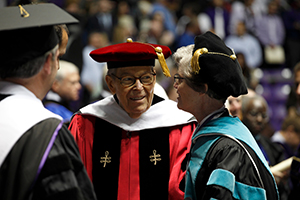 As noted in that interview, Brady took time every year to evaluate his goals. “You oftentimes find me disappearing from society for a few days each year between the first of December and the end of January. During those few days I am pretty well isolated. During that time, I carefully review that which has been accomplished during the past year, documenting the year’s accomplishments so that I have a record of what has been achieved. I then evaluate where I stand with respect to the goal structure that I have set. At the same time, I lay out a specific plan for the next year, so I identify specifically that which I want to achieve with respect to the goal structure during the next year.”

Brady penned his “Six Keys to Success in Athletics and in Life.” He would offer a laminated, credit-card sized copy to anyone who was interested. Many members of the campus community still carry the cards in their wallets. His keys include preparation, extra effort, unselfish teamwork, following leaders’ counsel, ambitious goal-setting and determination.

The Weber State community acknowledges with deep gratitude that Rodney H. Brady accomplished one of the major goals he set for himself as a senior in high school “to serve someday as the President of a fine college.”