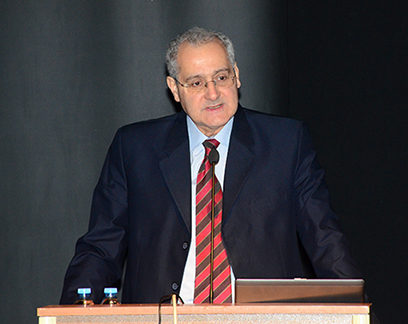 Before Kaadan began teaching as a visiting international history professor at WSU, he taught at the University of Aleppo in Syria and was a successful orthopedic surgeon running a prosperous clinic. He has both a medical degree and a Ph.D. in history of medicine. By 2015, life in Syria consisted of bombings, attacks and kidnappings every day.

Kaadan and his wife fled their country to seek refuge in Turkey. Since then, the situation in Syria has exploded into the largest humanitarian crisis since World War II. The long war has claimed the lives of an estimated 450,000 people, according to the Syrian Network for Human Rights. An additional 4.81 million people have been displaced.

Kaadan and his wife arrived in Utah in December 2016. This semester, Kaadan is teaching courses on the history of science, the history of the Middle East and the Syrian crisis. He will continue to teach at WSU throughout summer and fall semesters.

“Weber State is very lucky to have Dr. Abdul Nasser Kaadan as a visiting scholar on our faculty,” said Susan Matt, history department chair. “He is an internationally known scholar and a pioneer in the field of the history of Islamic medicine. His research has been groundbreaking.”

Kaadan is president of the International Society for the History of Islamic Medicine and chief editor of the organization’s journal. His work has added to research about the history of medicine, especially bringing to light contributions made by Arab or Muslim physicians.

“In addition to his outstanding record of scholarship, we are fortunate to have Kaadan at Weber State to lend a firsthand perspective on the origins and consequences of the ongoing crisis in Syria,” Matt said. “The public can come hear him offer insights and analysis to explain these important world events. He’ll illuminate the very real human toll it has taken on the Syrian civilian population.”