'Is Mars Really a Place for Humans?' Question Discussed at WSU Event

OGDEN, Utah – Although a case can be made for human and robotic exploration in space, there is no compelling rationale for "putting down roots" anywhere off Earth, according to an astrodynamics expert who will present his analysis at Weber State University, Feb. 22 at 7 p.m. in Tracy Hall Science Center Room 234. 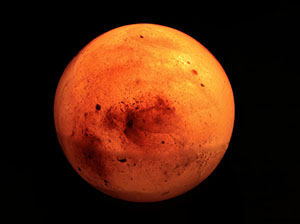 Daniel Adamo’s 90-minute presentation is titled “Questioning the Surface of Mars as the 21st Century's Ultimate Pioneering Destination in Space.”

“Humans are pushing up against the limits of our planet,” said John Sohl, WSU physics professor. “A common suggestion is moving to Mars, the only other planet in our solar system that might be an option. But does that actually make sense? If anyone knows what is required to get humans to Mars, it would be Dan Adamo.”

Adamo is recognized for his human space-flight trajectory design and operations. He worked as a NASA-Johnson Space Center contractor for 29 years. During that time, he served as flight lead for 10 shuttle missions and as primary U.S. trajectory point-of-contact with Russian counterparts during the Shuttle-Mir and International Space Station joint operations. Since retiring in 2008, Adamo has conducted astrodynamic research and consulted for NASA, the Review of U.S. Human Space Flight Plans Committee, the Jet Propulsion Laboratory and the Keck Institute for Space Studies.

His 90-minute presentation at Weber State will question why the surface of Mars is widely accepted as humanity's future “home away from home.” Science fiction movies and literature have helped lend credibility and allure to the idea. Nearly 200,000 people have registered as willing to attempt forming a permanent colony on Mars.

Adamo has found no evidence in his research that humans could survive on the surface of Mars long term, let alone thrive and populate. If humans were able to colonize another place in space, Mars would not be the most logical option.

“Research about our solar system suggests small bodies such as asteroids and the moons of Mars are humanity's best hope for pioneering off Earth this century,” Sohl said.

The community is invited to the free event, which is sponsored by the American Institute of Aeronautics and Astronautics and WSU’s Department of Physics’ HARBOR program.