OGDEN, Utah – Eric Amsel, associate provost for academic programs and assessment, and T. Ramakrishna (T.R.) Reddy, professor of political science, are co-recipients of the Weber State University Alumni Association’s 2017 H. Aldous Dixon Award in recognition of career excellence and distinguished service to students. Amsel and Reddy will be honored at a luncheon on March 22. 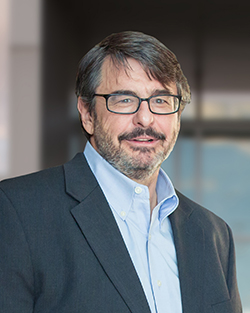 Amsel’s lengthy resume reveals much about his innovative teaching, renowned scholarship, prolific research, numerous publications and prestigious awards. And yet, in a single line, written by the former student who nominated Amsel for the Dixon Award, we learn everything we need to know about Amsel’s selfless character: “No matter when you [reach out to] him, he is always to the rescue!” That is a powerful, honest assessment of a man who knows a lot about assessment.

Amsel currently oversees and reviews all academic programs at Weber State University. He works closely with the Center for Instructional & Institutional Effectiveness and other campus units to identify program strengths and weaknesses, and recommend changes. In simplified terms, Amsel is responsible for maintaining the quality and integrity of a Weber State education. His office must collect and provide evidence that every academic department, program and general education course at WSU is effective, and that students are learning. He also presides over the university’s regional accreditation.

Amsel skillfully negotiates the sometimes conflicting interests of WSU’s 534 full-time faculty, 487 part-time faculty, 1,518 staff members, 16 executives, and 26,809 students. (Perhaps his remarkable focus and ability to put a positive spin on “friction” come from his many years of competitive curling.)

Amsel joined WSU’s psychology faculty in 1996. An outspoken champion of undergraduate research, Amsel collaborated with scores of students on research into human cognition and development.

His outstanding chairmanship of the psychology department and leadership of the faculty senate earned Amsel the respect of his Weber State colleagues. In 2005, he and other members of the Holocaust Commemoration Committee were honored with a WSU Collaboration Award. Amsel, a 2007 Brady Presidential Distinguished Professor, was named Utah’s 2006 Professor of the Year by the Carnegie Foundation for the Advancement of Teaching and the Council for Advancement and Support of Education. Following a nationwide search in 2016, Amsel and previous Dixon Award recipient Brenda Marsteller Kowalewski were selected as WSU associate provosts.

Amsel earned a master’s degree from Harvard University and a Ph.D. from Columbia University. Before coming to Weber State, he taught at Vassar College and the University of Saskatchewan. 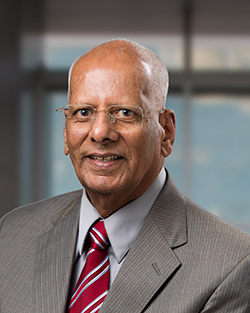 The Weber State from which T. Ramakrishna (T.R.) Reddy plans to retire at the end of spring semester 2018 is a far cry from the one he first encountered as a newly hired assistant professor in 1966. During a teaching career that will span 52 years, Reddy witnessed Weber State evolve from a small, fledgling senior college into a nationally respected university. By the time his desk is cleared, the India-born Reddy will have shared his unique perspective on American democracy and international politics with an estimated 30,000 students. He will have written more than 100 letters of recommendation for former students applying to graduate schools or seeking jobs. Many of his previous students have forged illustrious careers in medicine, education, politics, civil service, business and law; one became a Utah Supreme Court justice, and later, a federal judge.

Reddy, named Outstanding Social Sciences Faculty Member of 1980-81, infuses his classes with relevant assignments and topical guest presenters. In the wake of deadly attacks in the U.S. and abroad, Reddy invited India’s inspector general of police to speak to his students about combating terrorism. Reddy encourages his students to expand their worldviews. He was a longtime faculty adviser for WSU’s Model United Nations program and was the university’s Peace Corps liaison officer.

Reddy chaired the Department of Political Science & Philosophy for more than a decade. During his leadership of the WSU Faculty Senate, Reddy helped introduce plus-minus grading criteria. He piloted a proposal to include a faculty member’s terminal degree, the highest possible academic degree of a given field, in the tenure process. Reddy was instrumental in establishing the Dello G. Dayton Award to recognize outstanding teaching. He also successfully advocated for employee investment options that greatly enhanced the retirement plans of those who participated.

Reddy’s exceptional service to Weber State students and faculty will not end with his retirement. He plans to create an endowment to support a student research and writing award established in his name.

Since 1970, the WSU Alumni Association has presented the Dixon Award to outstanding faculty and staff who have distinguished themselves professionally and taken extra measures to meet student needs. The award is bestowed in memory of former President Dixon who served as the school’s chief administrator from 1919-20 and from 1937-53.

The 49th Annual H. Aldous Dixon Award luncheon is March 22 at noon in the Hurst Center for Lifelong Learning on WSU’s Ogden campus. The public is invited. Cost is $18 per person. Reservations must be made before March 17 online at alumni.weber.edu/Dixon or by calling 801-626-7535.