If you’re looking for an inspiring yet practical business read, check out the newly updated Multipliers, by Liz Wiseman. She got on our radar as a keynote RootsTech in Salt Lake City this February with a talk that had us live-tweeting like mad. That address was entitled “Rookie Smarts” in which she asks this question: “Is it possible we are at our very best, when we know the very least? When we are rookies?” She says that “sometimes the more we know, the less we see.” 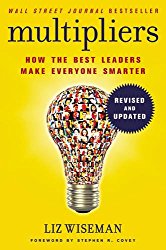 But it was Multipliers, a Forbes and New York Times bestseller, that put Wiseman on the map and we just finished devouring the revised edition.

Multipliers resonates because companies realize they “simply can’t afford leaders who waste talent, suppress vital innovation and slow business growth.” Wiseman notes that organizations rise or fall on the strength of their intellectual assets. Her book defines a question that consumed a research team for years:

Her team documents how people called “Multipliers” get more than double the output from their people, not only because people give more, but because they grow and become capable of more. They get more from people than they knew they had to give. “Multipliers don’t get more with less; they get more by using more.”

The opposite is true of “Diminishers,” whose people become simultaneously overworked and underutilized. Diminishers hoard resources but leave people’s talent unused, their capability wasted. Here is a quote about one Diminisher that sums it up, “The problem was that this leader did all the thinking. He was very, very smart. But people had a way of shutting down around him…This manager hired intelligent people, but they soon realized that they didn’t have permission to think for themselves.”

In contrasting two managers they studied, the book says, “One leader was a genius. The other was a genius maker. It isn’t how much you know that matters. What matters is how much access you have to what other people know.” Multipliers use “their intelligence as a tool rather than a weapon…. People get smarter and better in their presence.”

Wiseman’s book is quotable on just about every page, but here are some key points to whet your appetite:

Check out the revised edition of Multipliers with follow-up research that addresses two key questions not answered in the original. What to do about “Accidental Diminishers?” These are good guys, who sometimes act like bad guys. They have good intentions, but become Diminishers.  She also offers practical advice for recognizing and dealing our own diminishing tendencies (yeah, we all have ‘em). Also, who can make the shift and who can’t? What can we do with those who can’t?