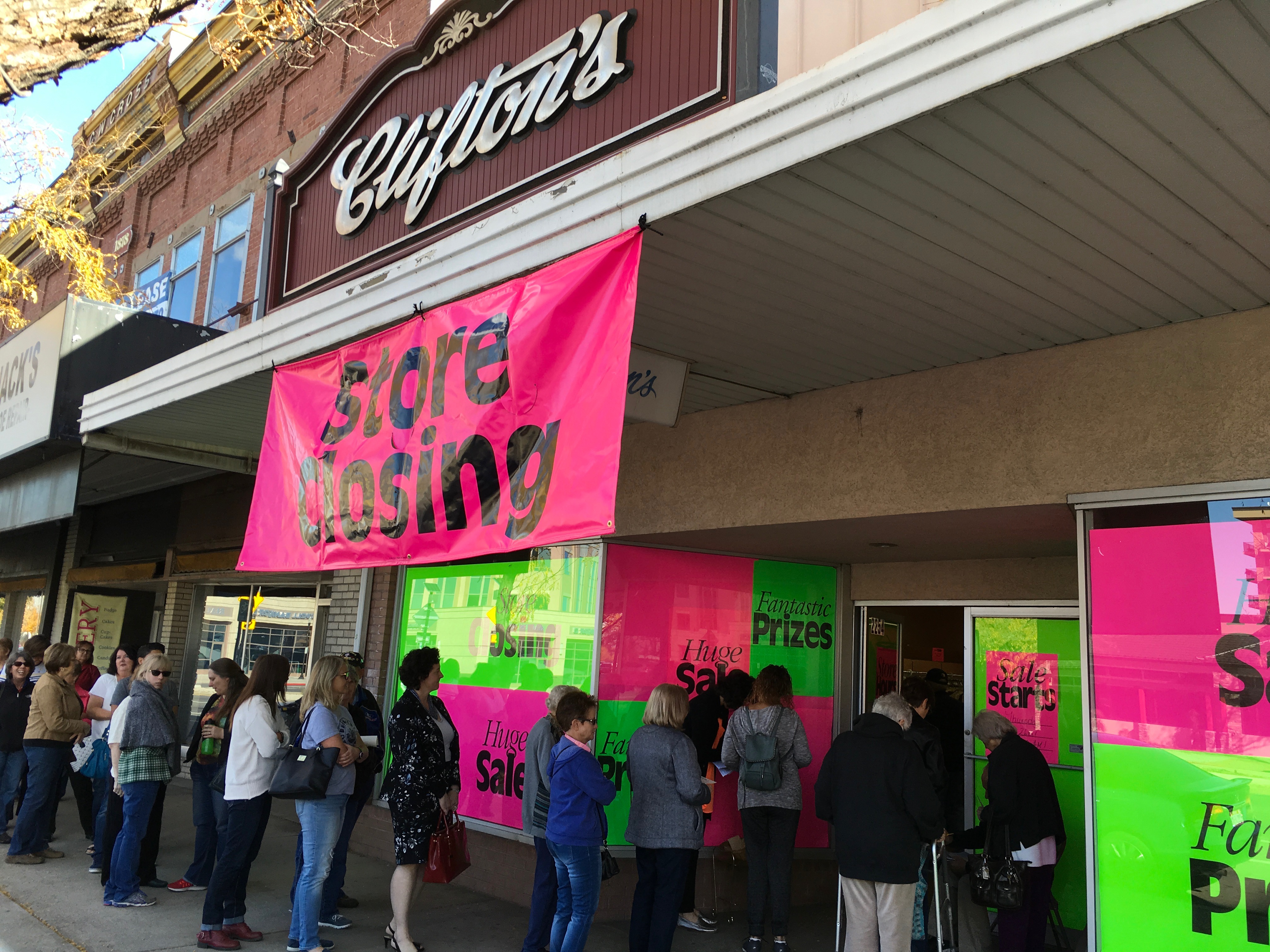 Sure signs of a legacy of great customer service and love showed themselves in October as eager customers lined up outside Clifton’s Women’s Clothing store to get the first glimpse of merchandise showcased for the “store closing” sale. But the people lined up weren’t just there for the deals, they were also there for the memories – 71 years’ worth.

Mary and George Clifton opened the shop in 1946 on Washington Boulevard, just a little ways down from where the shop currently sits at 2254 Washington Boulevard. Now their two daughters, Janith Wright and Lavon Jennings, run the store. But the two are ready to retire. “My husband has been retired for 12 years and it is just time,” Wright said as she picked a stack of hangers up off the floor. There is no one to take it over from them, so they figured it would be best to close shop.

They were advised that it would be best to sell their merchandise and then sell the building. Wright said she doesn’t know what will be in store for the space, but they feel confident it will be something good. The closing sale opened to the general public October 27 and things will continue to be reduced in price until they are gone. Wright hopes it will be before Christmas, but does expect they will be open into December a bit.

“Well, I don’t know how long I’ve been coming here. More than 40 years. Maybe 50 years,” said Pleasant View resident Vivian Haag. “I nearly cried yesterday when I opened my letter,” Haag said as she stood in line with her hands full of items to buy. She visited the store more than once on Thursday.

Many others also rushed in, some waiting in line more than an hour, clutching their letters they had received with the news of the store closing. “Our family has been blessed to be a part of lives for over 71 years and we feel it is time to retire and enjoy our families. Thank you for your loyalty and support,” the letter read.

Many reminisced about shopping at Clifton’s and many other fine retail stores including Samuel’s, The Bon Marche, JC Penny, ZCMI and others. A feeling of sadness that this store, which survived the closing of the Ogden City Mall and so many changes to downtown is closing. The average age in line may have been 70

Wright said her parents also had two other shops, Joy Shop and Mary’s Cotton Shop along Washington at one time and they all started working there at a young age. Jennings got her start in second grade, even! Wright wasn’t far behind and has been working there for 64 years. Her mom did the buying and taking care of the shop and her dad did the bookkeeping. The two were a great team, Wright said. She and her sister have always enjoyed working there. “We have always had good, faithful people,” Wright said and she surveyed the room, full of happy shoppers.

The family has seen much during their years on Washington. They have changed locations a couple of times, slowly moving north, but not too far. When the shop opened, Washington Boulevard and the area around it was a bustling shopping spot with many stores being owned by local families. The stores slowly started to close as owners retired and nothing filled their spaces, but Clifton’s hung on. The Ogden City Mall was built and many wondered if Clifton’s would stay afloat. It did and they didn’t mind the mall at all. “People complain and say the mall killed downtown, but many of those shops (outside the mall) were closing anyway. We didn’t ever think that. It was a good thing,” she said. Then the Ogden City Mall closed, but Clifton’s kept going. “We have loyal customers,” Wright said.

But part of that loyalty comes because of a good sales product and excellent customer service. Haag said she could always find something appropriate to wear there, whenever she came in. It became a go-to for prom dresses and more fancy apparel as well.

Wright said they always have prided themselves on good customer service above all else. “People come in to buy clothes and we have their sizes and what they like, so it’s easy,” Wright said with a grin.

Wright’s service was apparent in October as she stopped to tell customers what shirt looked good with what skirt, or how great their matching abilities were. Ogden resident Vicki Jackson loved to stop in when shopping for a special occasion and loved that they always made her feel special when she went in. She was recently shopping for a dress for her grandson’s wedding and the clerk helped her find the right combinations for quite a while and she left feeling confident after the help.

Wright and her sister have loved watching the renaissance of Ogden these past few years and Wright expressed her appreciation for former Mayor Matthew Godfrey and his vision. “He knew how to do things, how to make things happen,” she said. She also attributes the success of the Clifton’s to the fact that she always stayed involved on different committees and events happening in Ogden. “I always knew what was going on so we could stay current and aware of any changes happening,” she said. “That has been a big help,” she added. She likes what she sees now with all the different groups and organizations showing such an interest in Ogden.  She’s worked with six mayors and has seen a lot of different leadership styles through the years.

And as for fashion – she’s seen it all. “People used to have to have things a certain way and have complete outfits that matched from head to toe. Now it’s anything goes,” she said with a laugh. But she likes that. It makes buying easier, because there are such a wide variety of options and they have been able to tailor their merchandise for all ages, including that young high school prom age. “You used to have high heels, gloves and a hat to go shopping, but not anymore!” Wright exclaimed.

In the end, the family is delighted with the success its seem and attribute that success to their favorite part of the business – the customers. “They’re family,” Wright said.

The store will keep its hours of Monday through Saturday from 10 a.m. to 6 p.m. until the merchandise is sold.