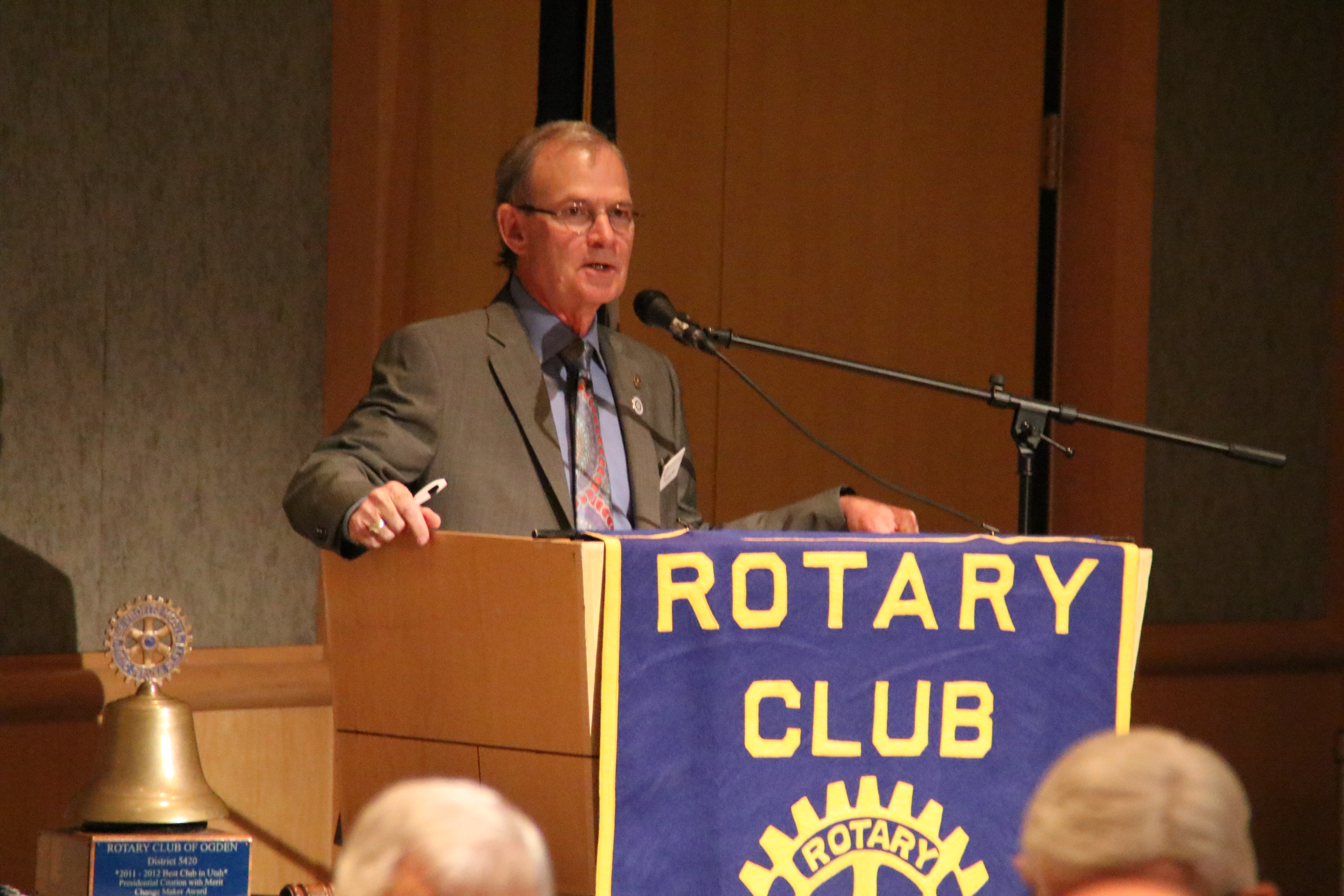 The Rotary Club of Ogden celebrated its 100th Anniversary last week week, reflecting on its rich history and current bragging rights as not only Ogden’s longest-running service club, but its largest. Rotary crosses the 100-year mark not like a feeble senior, but more like a runner looking strong and ready for the next race. The club has over 100 members, and the roster is a who’s who in the business community. Rather than congratulating themselves, however, they are celebrating in fine Rotarian style, by serving. The club plans to carry out 100 items of service this year. Guest speaker Dr. Scott Leckman said in his address on Wednesday, “Rotary makes it so easy for me to do good in the world. It is like a smorgasbord of good deeds I can do whenever I want. I can tutor students in a Title I school... I can get involved with global grants and do good things all over the world. This is a great time to be a Rotarian.” He added, “Rotary is local, and it’s also global.” Then he discussed worldwide initiatives, including the goal to eradicate Polio.

Dr. Leckman is the Rotary District Governor-Elect, a surgeon in Salt Lake City, past President of the Utah Medical Association and tireless advocate for issues related to poverty and international health programs. He is especially committed to the Rotary Polio initiative.

To provide historical context related to Polio, when Ogden Rotary began, World War I was winding down and the Armistice would be signed that same year on November 11, becoming the first Veteran’s Day. 1918 was the same year as the notorious Spanish Flu outbreak and in those years, Polio was one of the world’s most feared diseases because it paralyzed hundreds of thousands of children every year. After vaccines became available, Rotary International took on the pledge to eradicate Polio worldwide. Last week, Leckman returned from India with a group of 12 Rotarians who gave the oral vaccine to kids there. He said, “This has been our goal since 1985. In 1985, there were 1,000 kids being paralyzed every day in 125 countries. 1985 is not that long ago. Last year there were 22 cases in the world. We are hoping—I mean, I will believe it when I see it—but in this coming year we may see our last case. This is the greatest health initiative in the history of mankind.”

In the last century, Ogden Rotary has held also raised hundreds of thousands of dollars for local scholarships, put dictionaries in the hands of third graders, and other projects forming a list, “Literally as long as my arm,” said Leckman.

Leckman punctuated his remarks with a bit of levity when he joked, “Not too many things last a hundred years. Although, I think Rich Brewer may be one.” The club laughed good-naturedly and then Leckman went on to explain that Rich Brewer has been a member of Rotary for 58 years, more than half of its existence. Weber County Commissioner, Kerry Gibson, also spoke at the lunch meeting and said of Brewer, “I couldn’t help but get a little choked up when he mentioned my good friend Rich Brewer. I can’t think of anyone who has embodied the spirit of what Rotary is about more than him.” Gibson went on, “I am convinced, when you take away all the other clutter in life, of the feeling that comes simply from the opportunity to serve and give of your time for something that you really don’t think is going to benefit you…That is one of the true joys of life. That is one of the things that makes Rotary so meaningful. That is the reason someone like Rich Brewer has been a member for 58 years. Because he understands what service to a community is.”

Last week Ogden Rotary was presented with recognition awards by the Weber County Commission, Governor Gary Herbert and the Ogden City Council. In addition to an award presentation by Gibson, Ogden City Councilman Ben Nadolski read a resolution of the City Council honoring the club, and its motto “Service above Self.” 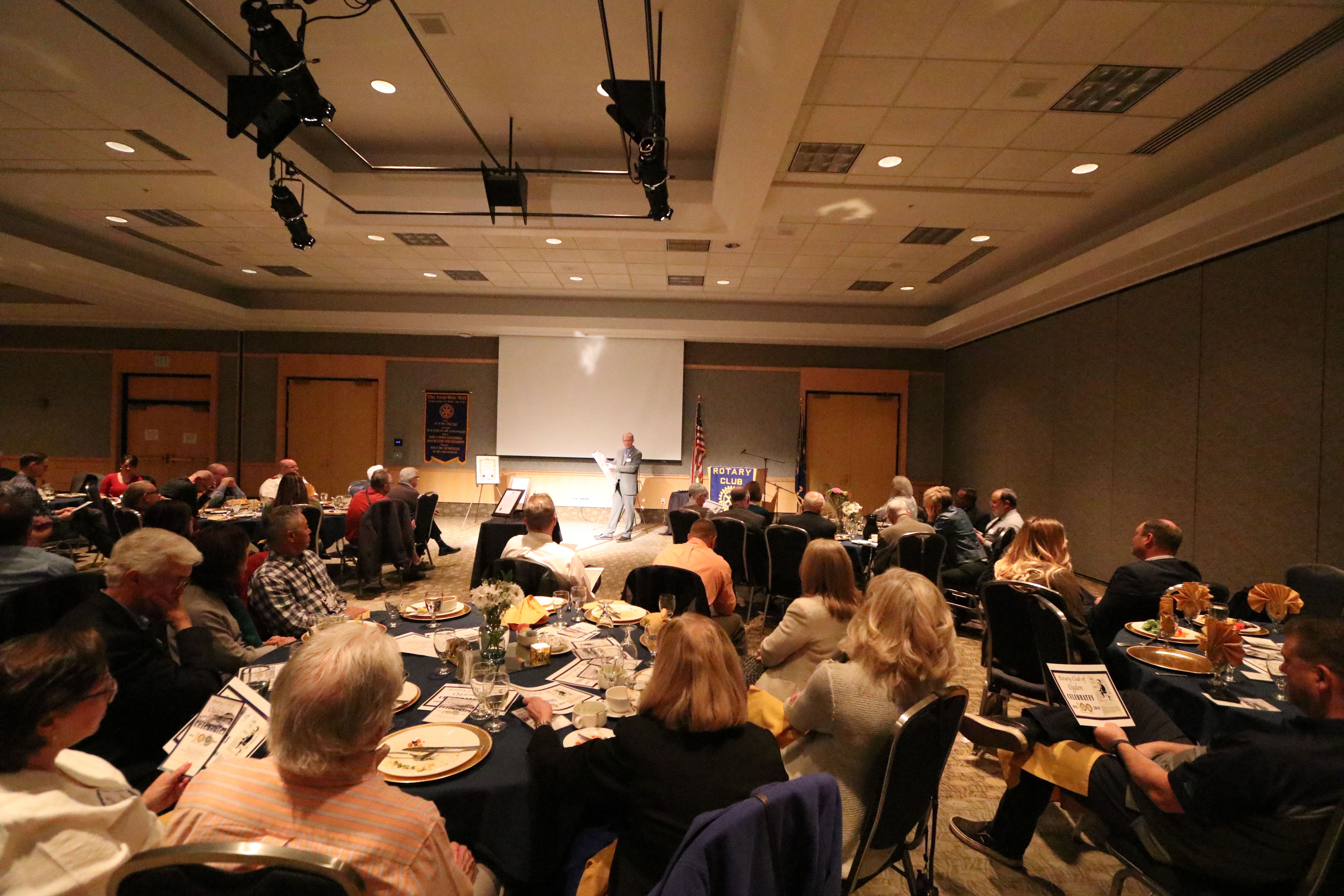