Weber State University alumnus Ben Taylor will discuss how his experience interacting with a Liberian, soliciting for a handout on social media, turned into a humanitarian opportunity and national news. The campus community is invited to hear Taylor’s speech, Sept. 20 at noon in the Wattis Business Building Smith Lecture Hall Room 206/207.

Taylor’s story began in 2017 when he responded to what appeared to be a scam message on Facebook from “Joel” in Liberia. Taylor decided to play along with Joel to expose the tactics of the scam. Taylor wrote to Joel that he was a photographer and would be willing to purchase quality pictures of a Liberian sunset. To Taylor’s surprise, Joel sent a few photographs taken with his cell phone.

Taylor then sent Joel an inexpensive digital camera with the instructions to work on his photography skills. Joel soon sent Taylor many pictures of everyday life in Liberia. In order to compensate Joel for his work, Taylor published the pictures in a book he sold online for $10. The book, “By D Grace of God,” sold quickly, and Taylor was able to wire Joel $1,000. Taylor told Joel to keep $500 and donate the other $500 to charity. Joel responded with more pictures. This time the photos were of Joel donating school supplies he had purchased with the $500 to five local schools.

The experience has sparked an unlikely partnership between Taylor and Joel. “I’ve changed,” Taylor said in an interview with CBS Evening News, which aired in March 2018. “I set out to embarrass a guy. I ended up helping a guy. I would much rather continue to help people. You feel good when you can help others.”

Taylor believes the key for developing nations is to help them grow small businesses. “I want to help people learn skills they can use to support themselves,” Taylor said.

“Liberia has a lack of clean water,” Taylor said.” It makes it hard for people to be successful when they keep getting sick.” 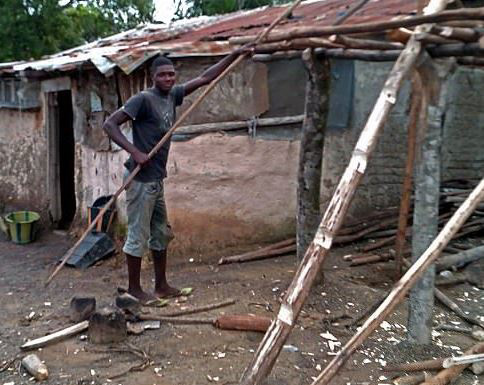 The proceeds from Joel’s book are now being used to install water filtration units in multiple communities.

“I hope that while speaking on campus Ben will be able to raise some additional money for his efforts,” Vaughan said. “What Ben is involved with now is trying to help an individual raise money to improve living standards in his community. That’s an inspiring entrepreneurship story.”

As the director of WSU’s Center for the Study of Poverty & Inequality, Vaughan brings speakers to campus each semester to raise awareness to the issues.

“I think what Ben’s story shows is that one person in a local community can have a reach,” Vaughan said. “Ben is having an impact in Africa. I think that an individual’s impact can be as large as they want it to be.”

“It’s opened my eyes to a different part of the world." Taylor said of his experience. “The best way to lift people out of poverty isn’t constant aid. It’s treating them like partners and giving them opportunities to use their talents.”

Visit this link to see national television coverage of this story.