Weber State University will host what it hopes will become a world-record groundbreaking ceremony for the new athletic complex at Stewart Stadium by asking every fan at the season-opening football game, Sept. 15, to participate.

Each fan who enters the stadium for the game against South Dakota will have a chance to turn some dirt to celebrate the start of construction for the new complex, which will be located at the north end of Stewart Stadium. 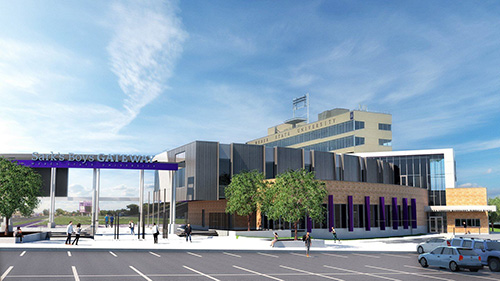 Gates open at 4:30 p.m. The official groundbreaking ceremony begins at 5 p.m., and game kickoff is at 6 p.m. Everyone who enters the stadium during that time gets a turn with a shovel. Having fans’ participation in the record-breaking event helps symbolize the community support for Weber State athletics.

“This building is transformational to our program,” said Jerry Bovee, Weber State athletic director. “Over the last 10 years, we have made great strides in improving the athletic and academic facilities for our student-athletes, and this is a capstone project that will assist in the development of not only the football program, but also all of our 16 sports. This is made possible through the generous donations of community members and former student-athletes.”

The building will include the Barbara and Rory Youngberg Football Center, the Sark’s Boys Gateway, the Stromberg Strength and Conditioning Complex, the Marquardt-Kimball Plaza and the Behnken Plaza.

The facility will include a new plaza, ticket office and souvenir shop and will serve as the main entrance to the stadium. Housed inside will be a state-of-the-art strength-and-conditioning facility for all Wildcat student-athletes.

“This building demonstrates to recruits, players, coaches and staff the commitment Weber State University has to its student athletes,” said Jay Hill, head football coach. “This new facility is critical for our program’s progress moving forward. It is fundamental for recruiting and the future development of our players.”

The facility will be ready for the start of the 2019 football season.