Hall’s passion for and persistence in providing educational opportunities to the less fortunate, benevolent care to the afflicted, food to the hungry and cultural experiences to the community have a pervasive impact at home and abroad. 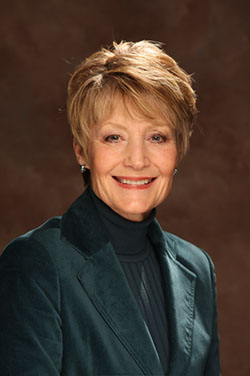 Hall graduated from Skyline High School in Salt Lake City. As a student at Weber State, she represented the college in the Miss Utah Scholarship Pageant, and was selected first attendant. She performed with various choral ensembles and held leading roles in numerous musical theater productions. Hall was recognized as Outstanding Woman of the Year in 1969, the same year she graduated, cum laude, with a bachelor’s degree in psychology. She met her husband, Alan Hall, at Weber State. Soon after their marriage, the Halls joined the Peace Corps and traveled to Bahia, Brazil, to work alongside villagers in eradicating a contaminated water supply and addressing other poverty-related issues.

Hall earned a master’s degree in psychology from Brigham Young University and obtained certification in school counseling from the University of Utah. For nearly 20 years, she was a high school counselor in the Ogden School District, working with at-risk youth, teen parents, youth in custody and Spanish-speaking students. Hall initiated the scholarship and recognition program at George Washington High School, and was also an adjunct instructor at Weber State.

Hall co-chairs the Alan and Jeanne Hall Foundation, a family-run, nonprofit organization whose main objective is to improve the lives of low-income families by helping them become self-sufficient. The foundation also strives to aid those seeking high-quality education and access to cultural experiences. The Halls support multiple programs and scholarships at Weber State, including the Alan and Jeanne Hall Global Entrepreneurship Program.

Hall is a past board president of the Boys & Girls Clubs of Weber-Davis, and a previous member of the Weber County RAMP Tax Advisory Board. She has been honored by notable organizations, including the Ogden School District, Ogden Elks Club, Ogden-Weber Chamber of Commerce, Weber State Alumni Association, Weber-Davis Association of Realtors and the United Way of Northern Utah. On Utah Philanthropy Day 2018, Jeanne and Alan received the state’s Philanthropic Leadership Award.

Hall is actively involved in church service and has held numerous church leadership positions. She sang second alto in The Tabernacle Choir at Temple Square for many years. Proud of her Wildcat roots, Hall is quick to point out that her six children (and their spouses) are all Weber State graduates.

To view this story online, visit this link.