OGDEN, Utah – Could hemp be a viable cash crop for Utah?

Bountiful resident Jeff Colbert plans to grow hemp plants from seed, using different soil samples to see if this crop is viable in Utah. Hemp can grow 15 to 20 feet tall and is fibrous, unlike medicinal/recreational cannabis plants, which tend to be short and bushy, and are cultivated for their oil. Hemp contains virtually no Tetrahydrocannabinol (THC), the chemical compound associated with the medicinal and psychoactive effects of marijuana.

Colbert, who had to get a state license to grow the plant, knows his research will be closely monitored.

“Throughout the three-month growing cycle, the plants will be subject to surprise visits from the Utah Department of Agriculture and Food,” Colbert said. “If the plants have more than 0.3% THC, they will be destroyed.”

For Colbert, the research is the culmination of a 25-year-old dream, one that seemed unlikely until the federal government passed the Farm Bill of 2018, granting states the right to regulate the growth of hemp.

“I’ve always liked plants. I’ve always liked botany,” Colbert said. As a pre-teen, Colbert convinced his parents to let him grow a garden in their West Valley City yard. His dad helped him till the garden, and Colbert experimented with what needed to be added to the soil — everything from pigeon waste to gypsum to sheetrock. Eventually, Colbert was able to coax corn and pumpkins from the “poor West Valley City soil.”

By age 18 Colbert was performing manual labor and making deliveries for a greenhouse not far from his family’s home. At 19, he served a church mission in Tokyo. One of the highlights of that experience was meeting a woman with a bonsai garden.

“She showed me trees that were 150 years old, 2 to 3 feet tall with these giant trunks. I spent part of a day cleaning the roots,” Colbert said. The experience only enhanced his love of plants.

When he came home from his mission, Colbert returned to the greenhouse work.

“Back then, I recall a friend’s father was taking cannabis to relieve chronic back pain,” Colbert said. “I started thinking, if it does that, what else can it do?” 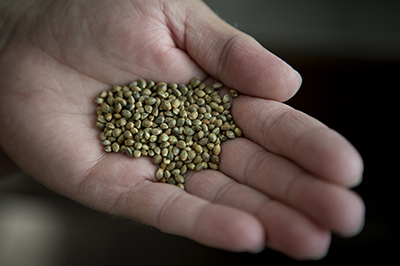 The idea prompted him to contact another Utah university and ask about growing cannabis to research its properties, Colbert said. The person laughed him off the line, thinking he was some kid looking to get high.

Discouraged, and recently married, Colbert realized he needed a better paying job, so he followed his dad into a career in law enforcement, where he’s spent the last 20 years.

Colbert settled into raising a family of three, and growing fresh vegetables at his Bountiful home. Despite being smaller than his boyhood garden, his current plot features much better soil, thanks to it being situated on old orchard land.

Then in 2015, he and his wife started thinking about his career after law enforcement. He wanted to study plants and found Weber State was the only school in Utah that offered a four-year degree in botany. Later that year, he enrolled as a part-time student.

Colbert took an ethnobotany class taught by assistant professor of botany Katharina Schramm. “She taught us about ethnobotanists traveling the world and learning of plants and their properties that could have pharmaceutical application,” said Colbert. “This was in 2018, the same year the farm bill was passed saying hemp was legal, but leaving it to the states to determine how legal.”

Colbert researched the statutes. When Utah passed Proposition 2 (the Medical Cannabis Act) — something Colbert never thought would happen — he decided the time seemed right to revisit his long-held dream. So he proposed the hemp research as his thesis, still expecting an “oh no” answer.

“In law enforcement, no is no,” Colbert said. “I didn’t see that in the university. It was more of a yield sign. Let’s slow down, make sure everything is clear.”

Schramm, Colbert’s faculty advisor for the project, said that Colbert’s determination and good nature helped alleviate her initial apprehension about the project.

“Jeff’s background in law enforcement and his character are perfect for making such a big production happen while staying firmly focused on the science,” Schramm said, acknowledging his proposal has faced many obstacles along the way.

“I am absolutely floored that he works graveyard shifts while being a full-time student while having a family,” Schramm added. “That is a level of dedication to his life, his family and his education that really humbles me.”

Colbert will grow 48 plants, with three redundancies. The plants will be grown in three different soil samples taken from the old Bonneville shoreline east of Skull Valley. (The samples represent the Provo, Stansbury and lake bottom geologic layers.) Depending on how well the plants grow might indicate which soil is most conducive to hemp.

In planning the project, Colbert had to consider issues like sunlight and irrigation, but also had to account for security measures given the controversial nature of the plants. He received $1,800 in grant money from WSU’s Office of Undergraduate Research, with $500 to cover the state license to grow the plants and another $800 allocated for fencing.

Throughout the growing season, Colbert will test the plants for fiber production and fiber length. The quality of the fiber is key for commercial applications of hemp.

Colbert’s research comes at a time when the hemp industry is estimated to be a $700 million a year industry and growing. Colbert points to Kentucky, which has plowed under much of its tobacco fields and replaced them with hemp. The fibers from hemp are used in everything from textiles to rope to concrete. One portion of the plant is now being used to absorb oil spills in the ocean.

The outcome of Colbert’s research remains uncertain, but as he points out, “even failure is a success,” because he can learn from it. If the plants are low fiber or have to be destroyed because of THC levels, he’ll still learn more about the ability to grow hemp in Utah conditions.

He plans to analyze the data collected from his crop in the fall, and present the findings at conferences and symposiums next year.

Colbert plans to retire from law enforcement in January 2020, and earn his degree three months later in April. He and his wife are looking to purchase at least five acres of land where he can expand his organic vegetable garden and potentially do more research on hemp. He might even employ what he learns from his research.

Schramm points out that the research educates Colbert about science, while also investigating a potentially lucrative crop for Utah.

“I really hope that our plants don't get destroyed by bugs or pathogens, that no one accidentally or willfully destroys the research and that we'll get valuable findings for Jeff and Utah,” said Schramm, crediting Colbert’s resiliency as key to the research going forward.

“I hope people see that I was willing to fight through roadblocks and that I was tenacious,” Colbert said. “If hemp is a viable cash crop, I’d love to see Utah’s economy bolstered.”