Harris will address graduates in the Jerry & Vickie Moyes College of Education at 8 a.m. in the Dee Events Center. He will also speak in the John B. Goddard School of Business & Economics, the College of Engineering, Applied Science & 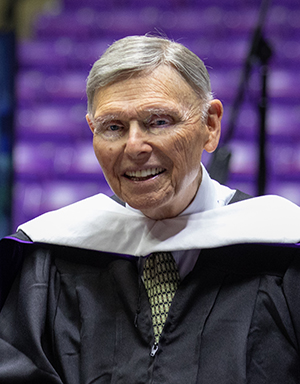 Technology and the Dr. Ezekiel R. Dumke College of Health Professions. Other graduates will hear his pre-recorded remarks in college convocation ceremonies held throughout the day.

Harris, his wife, Marcia, and their three children arrived in Utah more than 30 years ago for a job opportunity with Thiokol Corporation. They quickly fell in love with Northern Utah and have devoted themselves to serving the community ever since.

Throughout his distinguished career, Harris held several executive positions, including vice president and general counsel for Thiokol. He has also served as a judge deciding civil cases in the Utah State Courts for more than 20 years.

In addition to his professional accomplishments, Harris has served the community in various capacities. He played an instrumental role in kick-starting the Bonneville Chamber Music Festival in 2007 and has held leadership positions for several local organizations, including the Ogden Symphony Ballet Association, Utah Symphony and Chamber Orchestra Ogden.

Harris also volunteers in local elementary schools helping students improve their reading skills and learning about the U.S. Constitution. The governor of Utah and the mayor of Ogden have both formally recognized Harris for his service to the community.

Although they are not graduates of Weber State, the Harrises are outspoken ambassadors for the university and lifetime members of the alumni association. They have also donated generously to the university.

In recent years, the Harrises pledged $1 million toward the creation of a lasting endowment that would recognize and reward innovative teaching. The gift prompted $2 million in additional support from private donors, and in the spring of 2019, 12 faculty members received the Presidential Teaching Excellence Award.

The Harrises also contribute to a study abroad scholarship and defray costs incurred by performing arts students traveling to regional and national competitions. In addition, they have hosted more than 30 international students in their home.

Harris currently serves on the Telitha E. Lindquist College of Arts & Humanities’ advisory board. He received an honorary doctorate from Weber State University in April 2019. He and Marcia were also honored with the WSU President’s Award at WSU Salutes in 2019, where they shared their story on video.