Weber State University’s School of Nursing was selected as one of the 35 best four-year nursing schools in the country in 2018 by Match College, an online ranking site.

The ranking considered a school's dedication to professionalism, curricular design, and student feedback. Weber State was the only Utah university on the list, and of the 35 schools, the majority were private, including Villanova University, Texas Christian University (TCU) and Loyola University.

“We work hard in nursing to achieve excellence but we could not do this on our own. Weber State University as a whole has made this possible,” said Susan Thornock, School of Nursing chair. “The resources our university offers to students is outstanding; our mission and our core values are a guide to excellence.” 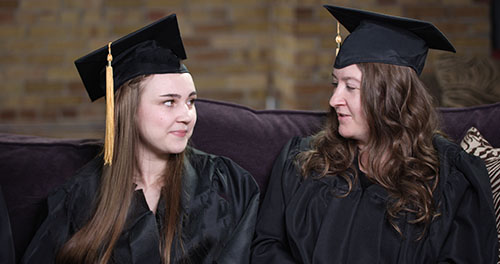 The ranking comes as no surprise to Jennifer Coleman and her daughter McKell Coleman Summers. Both are graduating April 27 from Weber State’s School of Nursing in the Dr. Ezekiel R. Dumke College of Health Professions.

Jennifer received her associate’s in nursing at Weber State in 1994 and has had a satisfying career in the NICU (newborn intensive care). When Summers received a presidential scholarship and was accepted into the school of nursing, she convinced her mom to join her to complete their bachelor’s degrees together.

“My journey at Weber State began in 1991. Weber State didn’t have all the programs it now offers, so after I received my associate’s, I decided to work and have a family,” Coleman said. Twenty-five years later, my daughter talked me into going back to school, and I’m glad that she did because it’s something I always wanted. I’m grateful for my daughter who encouraged me and was my cheerleader.”

The School of Nursing at Weber State offers many options to earn a degree. Coleman selected a hybrid option, which means most of her coursework was online. They met in class just once a month.

“I think healthcare is evolving all the time, especially with technology,” Coleman said. “Some of the changes have been really hard on people at the hospital who don’t adapt well and aren’t technologically savvy. I think being in school has helped me to adapt better and just to learn different leadership skills and be an example to new people coming in.”

Summers said Coleman was an example to many of the students in the class with her extensive experience and passion for the profession.

“I think what I’ve learned from my mom as a nurse is to have compassion and confidence,” Summers said. “She works in the NICU with premature infants, and she is able to take care of them when they are so fragile. I don’t know many people who love their jobs as much as my mom.”

Coleman will begin a Doctor of Nurse Practitioner program in the fall, and Summers has been accepted to the Weber State University Master of Science Nursing degree program.

Weber State will award associate’s bachelor’s and master’s degrees to 732 nurses in the 2017-18 academic school year.